Yesterday, I had gone to office and came back at around 6. After half an hour one of my friend called to ask “Where are you ? All fine ?” And then i came to know that there had been serial blasts in Delhi. I switched on the TV and there was blood all around at all the blast sites. People were rushing around and moreover it was getting darker so help, search and other things were becoming difficult. Well, an unfortunate day for Delhi.

So after all this, as always the debates start “we should curb terror” “should beef up the security” etc. Govt also has almost the same statements to give. We will find them, punish and all. One things is clear who suffers is the common man. Now people can’t sit in their houses all the time. Everybody has to go out and you never know when you are running with bad luck (that is what we can call it).

Now coming to what we can do to stop all this, everybody has different views to give. To be honest and fair, maintaining security at public places like CP, Gaffar market, M block market or any other area is really difficult if not impossible. Take this case only. Most of the bombs were planted in dustbins. There are so many in the city. Who can keep check on all the dustbins ? And its not only dustbin. It could be anything else like an abandoned cycle, scooter, some packet or anything. So how to stop that ?

What basically is required is making the country a better place to live by providing people with proper education, facilities and justice. People who are unemployed, not able to earn their livelihood or who have been denied justice are so easy to fall for all this ? As they are already saying that they are taking revenge of Gujarat riots. So why we let such things happen ? 1984 Sikh riots, Gujarat riots or anything similar are crying shame for the country.

One more thing i noticed that our media needs to act responsibly in such situations and otherwise also. Yesterday they spoke on Aaj Tak that a police has taken a child in custody who was having a bomb tied to his body. But after 5 minutes they said that NO, actually the child had seen the terrorists dropping something into the dustbin, so police wanted to get the information from him. What bullshit ? Take a minute and speak responsibly.

It has been raining in Delhi and around since morning. There is water everywhere on the roads and traffic is in worst condition. There are hell lot of traffic jams. Everybody is getting late. Its taking 3-4 hours in reaching Delhi from Gurgaon and 2 hours if you have to go within Gurgaon.

With pretty nice taste of rain i just came back from office. Now have to pack my bags and leave for home by night train. Thinking about leaving bit early as there are traffic jams and moreover a bit tight security due to 15th August.

A day of continuous rain exposes everything of our drainage system. Its so badly built that it rains for an hour and roads are full of water and traffic jams.

Something needs to be done !

Well, it does somewhat look like Baby’s day out 😉

Me, my friend Rajesh and his wife planned to go to see Lodhi Garden (in Delhi) and then have dinner at Lodhi Garden restaurant. We had only one bike so decided to take an auto and left for Lodhi Garden. Very first moment the adventure started. He took us from some stupid route and we didn’t get a bit of an idea where we were going ? Finally he reached near about but had to ask again. So after asking 2-3 people we were at the gate of Lodhi Garden restaurant.

When we entered the main gate, after looking around, a nice calculation went through our minds that it might be really expensive. Very nice & impressive ambiance. So we were happy. They have set tables and chairs in open. It was looking really sweet. So we asked them about sitting there. But the guy told that it was booked for some party and we couldn’t sit there.

So there was an option to sit in the hall: either ground floor or first floor. We entered the hall and went upstairs. That guy lighted the candle and gave us the menu. It was a full size, pretty heavy & complex 8-10 pages book. I just started going through the pages. Hmmm…the prices were pretty nice and moreover i couldn’t find anything like snacks and dinner. Oh ! it might be drinks only menu ? I asked Rajesh to ask about it and the waiter said “Yes sir…i will just give you the main menu”

Ah…the main menu was there. It was comparatively a fatter book of same size. Again the same thing: i went through the pages and could hardly understand what they were offering 😀 . Then on one page i noticed “Iced tea”…pretty recognized stuff…but for INR 395. So it was almost clear that it was time to leave as even menu was not understandable properly. We hurriedly left from there and came to Lodhi Garden.

It was already dark outside so not much fun over there also. We exited from another gate and didn’t even know where we were ? Again we waited for an auto but 🙁 . Then we saw a bus and got into it but ahhh ! it was going in the opposite direction so we had to get off at the next stop. There were some chances for getting an auto. Finally got an auto and we went to a Mall, actually planning for dinner as we knew about a food court there. We reached there and found there was no north indian food and only outlet serving it was closed 🙁

that it was also closed 🙁

Then we headed for 4th target Bikaner Wala even knowing that we might not get a seat. Yea the same thing happened…long queues…by now Rajesh’s wife was in pretty sweet mood 😉 We waited for 10-15 minutes and thought about leaving. While leaving she (Rajesh’s wife) blasted the guy at the counter that you have no space even to sit. There was another lady customer standing and she said “yeh bhi kya kar sakte hain” (What can they also do ?) and she said “I am not talking to you” 😀

Then we headed for our 5th target which was a simple and genuinely priced one. So finally we had our dinner there and came back by 10:30 PM.

Surely our day out 😀 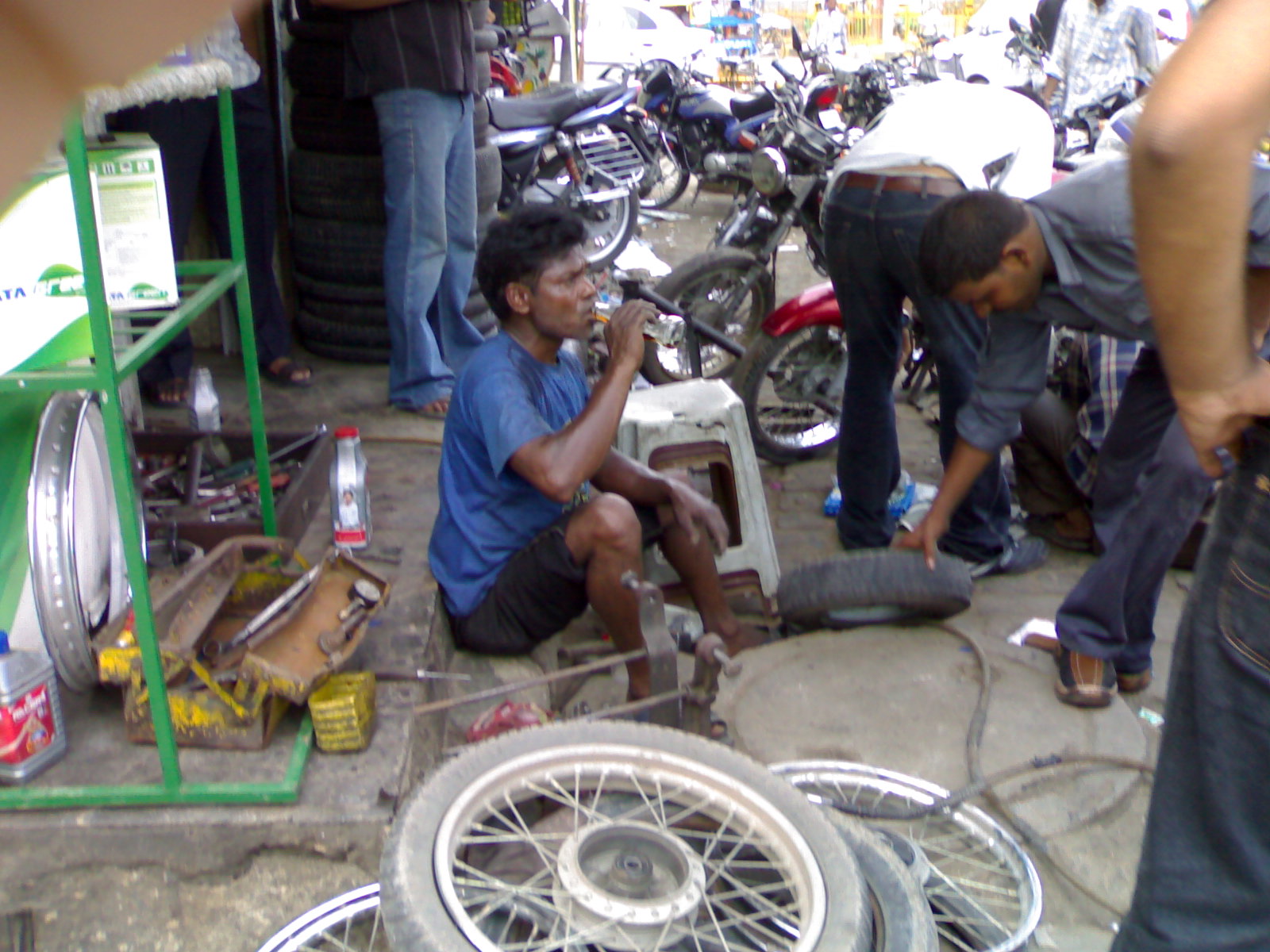 This auto is financed by: